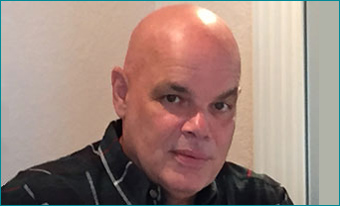 Pasco is a proud but scarred survivor of childhood sexual abused by a Roman Catholic Priest at age 11. The abuse went on for one year, and as many child victims do, Pasco blocked it from his memory. The memories of his traumatic abuse did not resurface until he was 35 years of age. Twenty-four years after the fact, Pasco read an article in the Providence Journal about a priest from his local parish being accused of molesting a boy in Iowa years prior. After recalling such painful memories, Pasco joined a lawsuit with 37 other victims against the Providence Diocese. In addition to years of therapy, this decade long lawsuit uncovered more atrocities which sexual abuse usually leaves behind in each of its victims. Overtime Pasco was able to face his past and continue his journey towards recovery.

Throughout the past decade Pasco continues to write an “ever-changing” memoir relating to his experience with childhood sexual abuse. Through his writings and presentations, Pasco examines his journey from victim to survivor to enlighten others who may be struggling, broken, or still unaware, yet filled to the brim with anger. Therapeutic tools are available and therapy played a big part in his survival.

Pasco spoke at the RI State House as part of National Sexual Assault Month. He participated in educational groups at the RI Department of Corrections, working directly with sex offenders in the Sex Offender Treatment Program. Back in 2015, Pasco participated in training at the Natick, MA army base for SHARP.

Pasco is a survivor, and a proud member of SSRI.